I only made a couple of critters for the Critter War, it ends today...so here they are....

An owl (I think it looks a bit demented)

Challenges are posted on Saturday for Nerd Wars, so I'll be getting back into crafting....

and there are 13 1/2 days left for school...so will be busy doing grades, paperwork, packing classroom in the next two weeks.....then I'm off on an adventure for a bit...

For more projects, check out Wisdom Begins in Wonder, Creative Friday and Tami (but no link yet)

Wow is it HUMID here today!!!  It will be MISERABLE in the classroom....

After finishing up Knit and Crochet Blog week....and the end of Nerd Wars, I kind took an unplanned break....I just didn't craft....I read....I read The American Heiress, His Majesty's Dragon and recently finished Redshirts by John Scalzi and started W by James Patterson and Bossypants by Tina Fey.  Those are in my nook, and I just downloaded another series this morning, Wool by Hugh Howey that sounds fantastic...and then the novel The Distant Hours by Kate Morton.

I also went to the WEBS sale to get Kristin Nicholas new book 50 Sunflowers to Knit, Crochet and Felt.  I knew she was going to be there and wanted to get it signed.  I also picked up another Jessalu bag to add to my ever-expanding collection (but no yarn, the lines were insane!)...In the mail yesterday, I received my copy of Botanical Knits by Alana Dakos.  It's gorgeous!  Alana's Seedling hat was my first completed knit and I love all her designs...I'm going to be making the Cedar Leaf shawlette for my dissertation....Oh and I also recently bought Clara Parkes The Knitter's Book of Socks.  So I really have spent my time reading...

Last weekend I joined the second Cute Critter War while we are waiting for Nerd Wars Tournament 8 to begin.....and I made a couple of small things for that...

Yesterday I was going to go to the Mass Sheep and Wool, but I again have a sinus/ear infection..and it was cold, windy and raining...so I stayed home, watched some marathons and worked on these...

And my Plum Pudding...I was going to stop this, but I'm gonna go until I run out of the Plum Pudding yarn...I have about a half skein left...so probably one more complete repeat...It now takes about an hour to complete 1 row....I added three rows yesterday....

Oh and I made another baby hat..I love this one...

Now for the update...

WIMs: Projects I have the yarn and the pattern
Sweaters:


The Age of Brass and Steam
West End Scarf


Siren Socks
Hey, Have I Ever Steered You Wrong?


Firebird
Rescue Me, Chin Boy and Show Me the Stars

I know I've been missing...and I do have a few small things completed....but really I have not been crafting and I have been sick this past week....and just have not felt like there is anything to share...so instead of blabbing about nothing...I just didn't post...hope all is good with everyone out there is blogland...and I will be back tomorrow with my update.....
Posted by Gracey is not my name.... at 7:13 AM 3 comments:

So yesterday, after a pretty good day with my students...I came home to two...two yarn club arrivals....yeah!  Full mailbox! 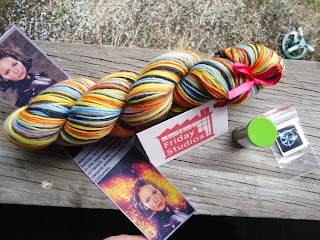 It's very colorful and very pretty....also included was some Tracker Jacker lip balm and some stickers...

Next up was Knit and Fiber Creation....Walking Dead Club...This month is Zombie Milton... 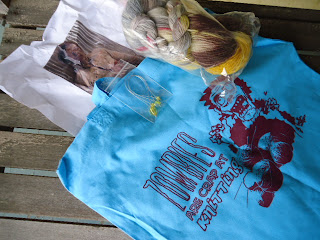 With a cool zombie project bag and some stitch markers....love!

Here's a closeup of the yarn..a mini-matching skein was included... 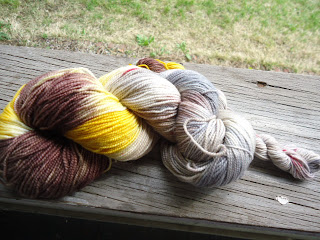 I really like yarn clubs, I  love seeing the surprises and the unexpected colors that the dyers create....this is the third version I've seen of "Girl on Fire" and I think she did a good job of capturing the colors from the movie.....

and then I found out that the Hunger Games nook book (original version) of Hunger Games was on sale, so I downloaded it...as one of my students is borrowing my book at the moment...I don't know why I enjoy the book so much, I just do...

I really have nothing to say...I took an unexpected break....posting for 19 days straight, my regular posts and then for Knit and Crochet Blog Week was tough....then it was the end of the round for Nerd Wars....and then I decided to read...and I started and finished a book...and well here we are...

I have not done any crafting in a week.....but what did I finish before that?

I made a couple baby hats to fit into Nerd Wars projects...

The top hat is my Citrus Flower hat...the flower is inspired by the lemon flower that blooms on a lemon tree before the lemons appear.  The second hat is made with scraps form my Manos de Uruguay Cotton Stria...a discontinued yarn that I love to bits!

The last thing I made was inspired by spring....

I finished reading An American Heiress.  Slow beginning, but if you are a Downton Abbey fan you will enjoy it...I have started His Majesty's Dragon, the first in a series for a readalong....I am really enjoying this book, but the writing style is a bit weird, however I really like the characters...

I also put the majority of my patterns and books in the Ravelry database and have organized many of them...this way, even when out, I know what patterns I own....I did my needles 2 weeks ago (my hooks, I know I have at least one of all sizes)...and, of course, I always keep my yarn up to date...speaking of which..got another package in the mail...

My colors...and I think a new yarn base for her...it's Superfine Merino, silk and stellina...

So I guess that is my update...how is the blogosphere?