This month went my crafting mojo, along with my blogging mojo!!!!  But I think it is on it's way back, as I picked up three different WIPs yesterday to work on them!  So let's see where we are, shall we??

So I have 5 finishes for this month, all hats and a beard....I have had three friends have babies join them this month, so I need to make some more baby hats....I finished one for Jacob...

I also never moved my Dr. Who scarf to the finished list, so it is there now...I completed a hat for a swap, and another hat for Nerd Wars in the latest Nerd Girl Random Fandom, Rage from 28 Days Later.


Yesterday I worked on three of my knit WIP's:  Light in Shadows, Tutti-Frutti Cowl, and my Colored Wings...I'm on the third wedge of my Colored Wings....I had made a mistake on it, as I lost the last stitch marker place and had to take time to figure out where to put it....same with my Tutti-Frutti Cowl...I had to figure out the mistake in the last row, so tinked back a row...

I have vacation coming up in two weeks, but before that, I have report cards, parent conferences and my formal evaluation.  Writing the lesson plan for that evaluation is taking teachers hours, average about 6!  It's the whole new evaluation process...I think it's ridiculous!  Shouldn't take that long to write one lesson.  So for the next two weeks, I will be super busy, but think I'm going to need to pick up my crafting to keep me sane!

Today I celebrated by wearing my hat and beard to work... 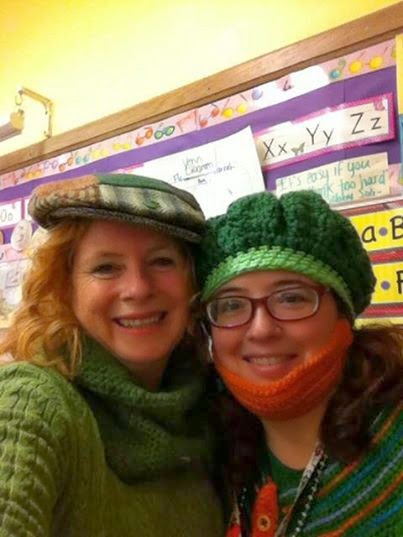 And I went to the dentist....and it took three shots to numb my mouth...and even then I could still feel the drill....he told me about a study about redheads, here is an article...The Pain of Being a Redhead, pretty fascinating..and so funny to find out about it on St. Patrick's Day....although not a "real" redhead (the Hubs is)...I have always had reddish-brown hair.....lots of red undertones to my hair...

So after last week, I really have nothing more to show...haven't added much to any project.  I am working on a swap project, but have had to RIP IT a couple of times, as it was coming out too small.

I worked a bit on the Tutti-Frutti cowl, but my stitch count is off, so I have to go back and figure that out....shouldn't knit while watching The Walking Dead....

It is finally warming up here...but yesterday I sat on the patootie and watched tv.....I watched the first season of When Calls the Heart, among other things....it's sweet and saccharine, reminds me of Dr. Quinn or Christy...but I enjoyed it....they really should name the Hallmark Channel, the Michael Landon Jr. channel....my favorite Hallmark movie is The Magic of Ordinary Days with Keri Russell and Skeet Ulrich, I even bought the book and read it.

So I'll just leave you with another picture of yarn (check out my post yesterday!)  I forgot one..I went to Newport, Rhode Island a couple weekends ago and stopped at a local store..some Louisa Harding Hula...it was on sale...

Bags:
Sarape Shopper
Pleated Purse
Circular Felted Bag
Posted by Gracey is not my name.... at 8:18 AM 5 comments:

Sometimes Swaps are not so good for your wallet...take my latest acquisition.  It was a yarn in my partner's favorite etsy shops...I bought a skein for her and decided to try a skein for myself....hence

And then, of course there are my clubs...

Nerd Girl Random Fandom in Rage on Dingo, inspired by 28 Days Later (I think she hit it head on!)

Dizzy Color Sunnydale Yarn Patrol....My Boyfriend is a Demon Robot on a MCN base

and some Zen Yarn Garden..it's a kit...Garden Glitter Sock in Wrought Iron to make Kyna

Most of these have no project attached.....but they are so pretty and make me happy....

Hi all!  Sorry it's been awhile...could not shake that whole sinus/double ear infection thing and had another round of antibiotics....then I was crafting for the Olympics...but mostly I read and slept....even with several snow days, I didn't get much done....we are expecting another snowstorm and snow day on Monday....really don't want it, as it means we will be heading into another week in June (we finish now on June 20, was June 16)...we have no a/c and it is brutally hot in our building during that time.....I also went away one of the weekends, which probably wasn't the best idea, I was so sick on Monday..luckily that was a "vacation" day and then Tuesday ended up being a snow day...

UPDATE from above, which was written yesterday...our snowstorm has been downgraded and we probably won't even have a delay...Hooray on one hand; Boo on the other!

So let's get to it, shall we? Except for BOK BOK, none of the new completed projects were on my list.  That's the way I roll!  And yesterday, the second month of Nerd Wars began, so I'll be adding some more projects for that! I've worked a bit more on my Colored Wings, but am still on the second wedge. I also have to craft for 3 swaps I just joined...yeesh!

Bags:
Sarape Shopper
Pleated Purse
Circular Felted Bag
Posted by Gracey is not my name.... at 8:47 AM 7 comments: