Every once in awhile, we give Baloo something new to try…

Last picture, he had snapped off half of the strand….

Checking out the Lorna’s Laces…he was looking for the new colors…didn’t find them, but did come home with a skein of Solemate in Midway (sorry no pics yet)

He also spent some time in the warehouse….where he was restrained….just some Mission Falls 1824 Wool in a spruce color (it is a crime that they went out of business!)
And again some Manos del Uruguay in yellow, grey, green and chocolate (again no longer making this…a crime!)…
He checked out the fiber, but really can’t get into spinning…but pretty colors!

Can you see him way up there?  Bottom right of the sign….He picked up some cute owl buttons and a skein of Paca-Peds in Vampire Kiss…..
He also got hungry and had a taco at Bueno y Sano, which was a new to him Mexican place…

And on the ride home, he tried to help untangle a skein of Plymouth Yarn Nazca Wind that the Hubs demanded a scarf made from….

WilKey AT The Hockey Game

He traveled to the game in my bag…

And came out to watch some of the game…

These guys were were very amusing!

I took some video of them…

Mighty Mites! very fun to watch!
The Hartford Whale did win – Yeah! It was a good game, The Hubs and I have talked about going more often, we both enjoy hockey..
Posted by Gracey is not my name.... at 9:39 AM No comments:

WIP and Yarn Along Wednesday 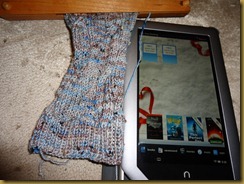 I’m on the heel flap of my Sifting Sands sock..woo-hoo I did cables! Go Me!

I am still reading Neil Gaimen’s American Gods, Gossamer by Lois Lowery and I downloaded The Quest of the Warrior Sheep by Christine and Christopher Russell. I finished Eleven, good book for 4-6 graders…

Haven’t really worked on too much beside the sock…with the injury, crocheting is uncomfortable…knitting seems to not cause much discomfort,  which is why I’ve gotten so far on the sock(s)

What are you working on? 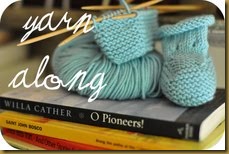 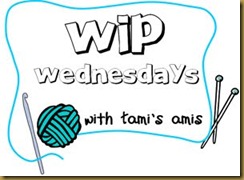 The Pie That Wasn’t

See this?  It started life as a pie with a granola crust.  My sister in law made it for me, along with utterly scrumptious deviled eggs, because I was hurt (and bought me some really yummy chocolate cake)

Granola crust = really chewy….the Hubs scrapped out the pudding and that’s what I’m having for dessert…yummy…not chewy…

Oh and I sprained my elbow and have tendonitis in my bicep…should take a couple weeks to heal fully….

It was really thoughtful, but I need to stop eating dessert, at least for a little bit…

And remember al those baby hats I made…Beckett Evelyn was born yesterday…she is beautiful, a little jaundiced, but beautiful!

So now a days, anytime I travel, I look for a local yarn shop (lys).  I had heard about Three Black Sheep from a fellow Raveler, who worked there (but was no longer there when I visited)

It was up Signal Mountain….where we got lost for a bit..and then confused…and then looking out the window, I shouted, “There it is!”

It was a nice bright, open shop.  The person working was friendly.

And, of course, I bought some yarn

Their own yarn line.  It’s nice and soft, going to become a baby hat with flowers.

A nice collection of buttons

And some Berroco Ultra Alpaca that was on sale

Wilkey visiting with the three black sheep…he’s standing in front of one of them….

So, because of the very strange snow storm in October that knocked out Connecticut for a week, we had no February vacation….

But we still had Friday and Monday off, so a four day weekend…good enough…

Back in December,  I decided to get the Hubs a trip for Christmas.  He really has not been too many places.  His family would go to Cape Cod and he had driven to Louisiana with the ex-governor’s (Buddy Roemer) daughter.  She was doing an internship at ESPN and it was time to go home…the Hubs – before he was the Hubs- helped her drive home.  And he got to stay in the Governor’s Mansion.  He took the train home.  So he has not been too many places…Me?  I’ve been to or through 31 states and 3 countries…

I wanted to go someplace I had not been….I first researched the southwest, too expensive for what would amount to 2 days….so for some reason I decided on Tennessee.  We do have friends near Knoxville, but I decided on Chattanooga….We loved it and plan on going back to Tennessee…not sure I could live in a conservative state, but it was gorgeous and the people were so incredibly nice!

We got in late Thursday night….the first thing we did Friday morning was head up Signal Mountain looking for a yarn shop (I know!)  Lots of pictures, so I’ll be brief from here..

Larry had put Wilkey in my bag and he enjoyed the trip with us, starting at Three Black Sheep Yarn shop.

I think this is moss, we don’t have this in Connecticut, not like this…it was very cool looking..

Very strange store..more on that later

The first night ended with our second BBQ at Sticky Fingers….not as good as Shuford’s, but good….

See this?  These are a menace!  We have a student who has one.  She’s been told repeatedly, not to pull it when there are a lot of people around…

Yesterday, we were lining up on the playscape area to go to busses….I had my students lined up…I turned around to leave and she had opened her backpack right behind me….Of course, I tripped over it, and fell..and now a possible fractured elbow…

I don’t think it is fractured, they couldn’t see a clean break on the xray, but there is something going on in the radius area of my elbow…so going for a second opinion to an orthopedic doctor tomorrow….aside from that, I have a sore/wrenched back and contusions on my knee…with other assorted aches and pains…

WIP and Yarn Over 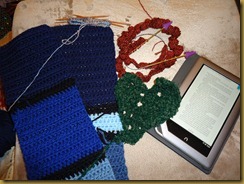 It’s been a couple of weeks….

I am reading Neil Gaiman’s American Gods on the nook, and Gossamer by Lois Lowry at school, and Eleven by Patricia Reilly Giff.

So, busy, busy, although this week my focus is on the correcting and grading needed to be completed for report cards.

So what are you working on?

Today was the first day of my afterschool crochet club.  I had done one two years ago and the kids have been BEGGING me to have another one…

I have 23 students signed up, 18 showed up…I have about 5 boys and the rest are girls.  One girl, C, is really good.  She has been crocheting for a couple of years, so she helps out a lot..

Today many of them mastered the chain, and a few went on to the single crochet.

They are pretty excited by it, as am I….

I had never heard of this…but the Grand Pooba of Nerd Wars used Moss for her Ravatar, so I asked who he was….
Now I was meeting her last weekend and wanted to make something to thank her for the awesomeness that is Nerd Wars…
I made her this

No pattern, just using pictures on line…..I think he came out pretty good…the glasses, tie and hair were the hardest parts…
Posted by Gracey is not my name.... at 4:35 PM 1 comment: