I have an idea for a project for Nerd Wars…and I picked up some yarn…now I am on Team Stargate Command…if you’ve never seen Stargate, well what are you waiting for???  It’s my fav sci-fi show.  I have others, but it is the one I have followed the longest….

Now I’m trying to matchy this…

So what do you think?

Option 1:  Socks That Rock Luscious Silk in Manly yes, but I like it too! and Periwinkle Sheep in Past Midnight

Option 2: STR and Bittersweet Woolery in Star Dust: Avalon (which is the name of an episode of SG)

Option 3 & 4:  This grey yarn which is Valley Yarns in Frost Grey….

Hmmm….I bought the Star Dust because it had some silver in it and thoght it would shimmer like the event horizon, but I’m liking the darker blue….decisions, decisions!

Saturday morning was an early one!  I am participating in a scavenger hunt on Ravelry and needed a picture of a Farmer’s Market…my bestest bud, Deidre goes to a plant one…so I met her at her house at 6:00 am….too early!  But it was good walk around, and I got my picture, plus some Gerber daisies…I love Gerber daisies!!!

Then we had some breakfast, stopped at a tag sale and said our goodbyes…She to plant all day, me to head to Massachusetts….BUT before I headed to Mass, I had 4 students to pick up….I decided since I had to pay $10 for a carload, I might as well load my car….so two sets of brother and sister joined me…I’ve had 3 of them as students….It was a long drive up…1 1/2 hours, but we enjoyed it….
They are all urban kids and had never been to something like this…most of my students ask me about crochet/knitting, they are fascinated by it….I have taught an afterschool class last year, but didn’t do it this year….
We had a good time and yes I bought some yarn!

More yarn!  I bought one of those skeins way up in the left corner on top…
The kids did the weaving tryouts and were at the looms for at least 30 minutes….they LOVED them!  Then one of the boys (in the red shirt) also tried his hand at spinning…again he loved it!  They pet sheep and lots of angora bunnies…They learned all about grooming bunnies from this lady.

Now I was looking for some yarn, as I have an idea for a Stargate hat for Nerd Wars…so I bought a couple of blue skeins, but then found one with silver shot through it…On the drive home, I decided to stop at WEBS, (as we had to drive through Northhampton)  The boys stayed in the car and the girls headed in with me….they were a bit overwhelmed..

I’m gonna post about the pairings of yarn separate, as I need a bit of help..
Long, exhausting day…but well worth it!
Posted by Gracey is not my name.... at 1:52 PM 2 comments:

Woo-hoo!  It's been awhile!  And oh I must have bored someone, cuz I lost a follower! Oh well!
New post to come of the Massachusetts Sheep and Wool...
Posted by Gracey is not my name.... at 7:22 PM 2 comments:

We have a 3 day weekend and I was heading to the Massachusetts's Sheep and Wool...and well today I invited some students to go along....I will have 2, maybe 4...2 sets of an older brother and sister....I've had three of them as students....I just figured I'm paying $10 for a carload, might as well load my car....Not sure two of them will go, as the parents are very protective...but the other two will...Mom is working and I've taken one of them before to a couple of places....
Posted by Gracey is not my name.... at 4:01 PM 1 comment:

Haven’t posted in several days….had some issues earlier this week between Blogger and Norton…Norton Utilities kept shutting me down and saying it was unsafe, but then I’d go into Norton Safeweb and plug in the addy and they said it was okay….anyhow, it resolved itself, after an unhelpful phone call to Norton…the guy just couldn’t wrap his head around the problem…so I’m hoping it’s safe….how would I know if I’ve been hacked…and I apologize if anyone has a problem, please let me know…

Been busy, end of school year…also participating in a scavenger hunt on Ravelry….lots of fun!  Nerd Wars!

Saw my niece in a show on Friday night – Alladin!  My brother kept asking me if it was done…now he has two kids and has never watched it…I have no kids and have seen it a bazillion times! 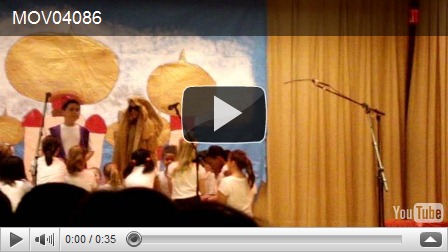 My niece is the one in the sparkly silver scarf behind Alladin.

Next, when I went to New Hampshire, I visited with my aunt and cousin.  My cousin had her son play guitar for me.  He has been studying since the fall.  This was the second time he played the song for me… 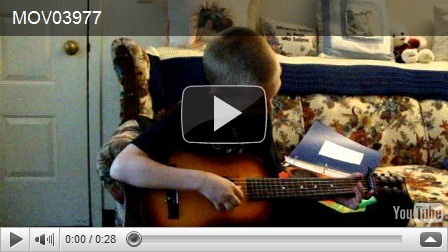 Kids are just fun…and gonna pop this fun picture in…

A gaggle of girls solving math problems…It was such a cute picture, I couldn’t resist….

I needed an action picture for my scavenger hunt and asked if my kids had any games coming up.  This is one of my students, Billy, running to first base….I think it’s such a great action shot…

This one was a bit different.  It was not held at a fair grounds, but at a living history museum.  It reminded me a lot of the Fiber Twist.

The Hubs decided to go with me and it was a long drive…2.5 hours….

It was held in Bristol, RI at the Coggeshall Farm.  We were able to go into the small farmhouse and it had a beautiful view….Overheard on the way in…3 local ladies…”Take a minute to appreciate where we live.” (not word for word)

beyond is water, I think it’s a bay…

The caretaker’s house…he/she live on site….there were a lot of free ranging chickens and turkeys wandering about.

We watched a sheep shearing, done with clippers

And this very interesting talk about flax

Then there were fiber enthusiasts gathered around

This is the ONLY skein I bought!

Once I read it was called “Mamma Mia” I had to have it!  Plus they are having a contest!  Good Karma Farm

You make something with one skein of their yarn and submit a photo…they will randomly pick a winner.  The winner wins 8 skeins in a colorway that you get to name!  How cool is that!

I also got the Jacob horn earrings that I walked away from in New Hampshire…I was so happy she was there..Buttons, Strings and Things

and a cool Rocket Sheep shirt from Sheep in the Road.

I was expecting something bigger, but it was a beautiful day in a beautiful area and I got some fun things and had fresh seafood for lunch at a waterside restaurant with the Hubs…all in all a good day!

You’ll have to forgive the pictures, as it is crappy raining here and will be all week…so figured I’d just take some crappy ones, until I can get better ones…

Each bag was a grab bag of a certain brand for $20.  I got 3…Berrocco, Plymouth Yarn Boku and Plymouth Yarn Encore…Encore is my go-to yarn now….

This is what it looks like out of the bags….The Hubs said he really likes the Boku and I quote: “It looks like that Japanese yarn.”  I about fell over….then 10 minutes later, he says, “Noro, right?  That’s it’s name?”  He is a keeper!!!  The other day he asked why I had my project bag…again my mouth fell open…he really does listen!!!!!

The Sheep and Wool Festival haul:

The Sheep and Wool, I specifically wanted to get the skein on the left.  It is London Fog by Mocha’s Fibers.  She only had lace left at the CT Sheep and Wool and I wanted sock weight….Then I got a discontinued color from Dirty Water DyeWorks…the purple in the middle…and the last is Black Cherry from mad Color (formerly Sereknity)  I saw this from someone else and had to have it…

The total haul: 70 skeins….There were 10 skeins in each of the grab bags and 10 skeins in the bags of Mirasol and Cascade Dolce that I got…..

So congratulations!!!!! We’ll talk, as you have a choice….

When I got off the exit to head to the NH Sheep and Wool Festival, I saw a sign advertising a buffalo farm….I decided I needed to go there.  I wanted to get pictures for my students.  We have been discussing buffalo recently and they are inner-city kids, so no buffalo there!

There were no buffalo around when I got there….(I did purchase some venison meat for the Hubs).  The owner said they were up there…

See that stone wall…way up there?  They were behind that…Usually they are down below, but it was raining, so they were up on the hill….I’m really out of shape, as I was huffing and puffing by the time I got there and saw

Then he came back…

and stopped and stared at me

Then he came closer 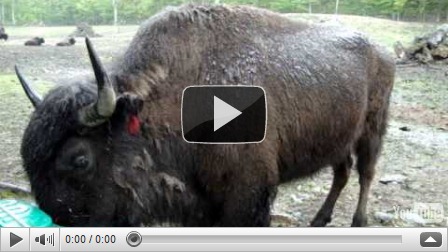 and then he stared at me again

There is only the electric fence separating us.  I was unsure whether he wanted pets or was warning me….My heart did beat a bit faster.  I did reach out and scratch his snout….It was all so surreal….and I thanked him before I left.

This was also at the farm….it is?

a hungry goat…is that an oxymoron?  Aren’t goats always hungry?  There was a feeder that you could get food out of…he knocked about a 1/3 of it out of my hand….I’m sure the free range chickens appreciated that!

I visited 5 LYS’s, including Webs.  I spent a day at the New Hampshire Sheep and Wool Festival.

I saw buffalo and had a close encounter! He was not at the NH Sheep and Wool, but down the road at a farm.  I’ll do a separate post, because I have more pictures… 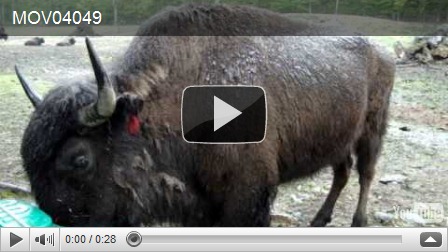 I was snuzzled by an alpaca, Cody….He was the friendliest alpaca I have ever met!  His owner said he likes foreheads and believes it’s all about him! He belongs to Higher Ground Alpacas in Salisbury, NH

It was raining, but I came prepared in my fun rain boots.  The bag I had picked up the day before at Webs.  I have the coffee cup (but I use it for tea) that matches the bag….

The black alpaca is Peppermint.  His owner said he likes to pose.  I have several shots of him.  I was trying to get the three together to show their range of colors..beautiful!!!  The fawn colored one was Nutmeg and I think the grey was Savory (but could be wrong).

There were llamas too…I love this picture…

There were gatherings of fiber artist.  This was the display and educational barn…

A Farm History museum.  The pump is working and was rebuilt.

This is what I walked through to get to the fairgrounds.  It was beautiful…

I did not take pictures of any yarn…but I have plenty of my own!  I only bought three skeins here……