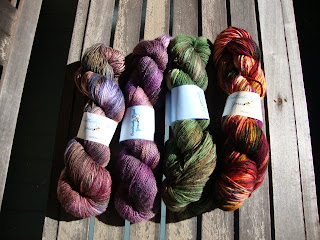 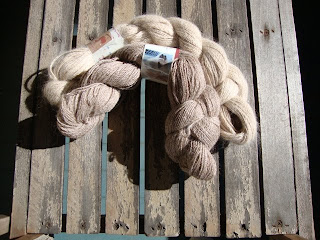 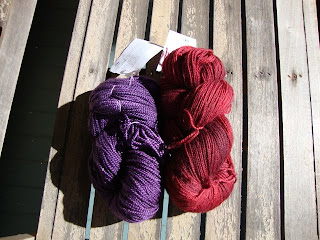 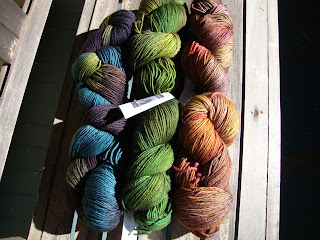 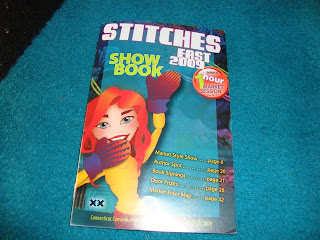 I went to Stitches East on Friday after school. I only went for the marketplace, as they really didn't have crochet classes. It was a great marketplace! I went with the intention of buying from small farms or indie dyers. It was chuck full of great stuff. I ran into Kathy Merrick, whom I had met at Creative Fibers when she gave a talk. She raved about a booth called String Theory. I eventually found them and loved their yarn!!!!! I bought 8 skeins. They are the six together and then the purple and red ones. I adore the purple one. It's called Black Tulip and is 50% silk/50% merino. It is so silky! I also visited Dianne from Creative Fibers and bought 4 more skeins from her. She has some lovely colors. So i now have 7 of her yarns, because I bought 3 at Rhinebeck. I have finished my fingerless gloves and will post a pic of those later... I also bought some alpaca from a farm in Virginia. The first skein was a bit pricey, but I loved the champagne color. I also got a free scarf pattern to go with it...Unfortuntely pictures were not allowed, so I took pics of my stash and the brochure book. So October for the next 2 years will be amazing! Since Stitches is here until 2011 and Rhinebeck happens every year. What a great month to fiber shop!
Posted by Gracey is not my name.... at 1:17 PM No comments:

So I've been reading Lucy's blog at attic 24 and she has me looking at things a bit differently. I am noticing more color in my world and how things stand out. She has a great eye and I love her photos and commentary. So I thought I'd go take some pictures around town. Although my town is not at picturesque as Lucy's, it can be very pretty in the autumn. Since I live in New England, we get the full range of fall foliage colors. So I took some shots around town a few weeks ago. I also visited Minor's Farm which is a local farm. It is on the highest hill in town and has some really pretty views. Also bought a Dutch Apple pie while I was there, it was fresh from being baked that morning, it was very good.....The colors of autumn are my favorites and the ones I am drawn to the most. I am making a pair of fingerless gloves at the moment from a skein of yarn I picked up from Creatively Dyed's booth at Rhinebeck. I can tell you I am a huge fan of hers now and will most definitely visit her booth at Stitches East tomorrow.
Posted by Gracey is not my name.... at 4:56 PM No comments: 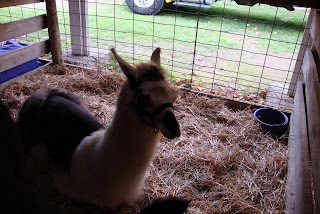 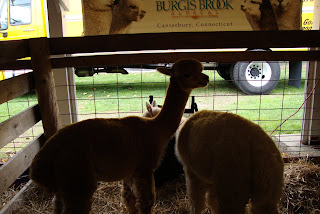 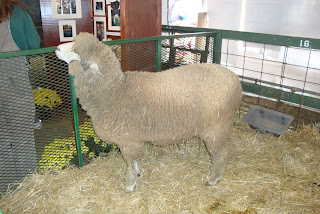 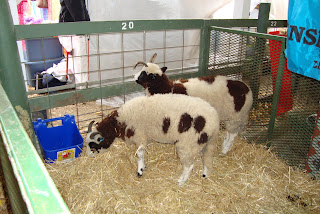 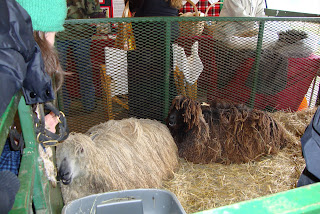 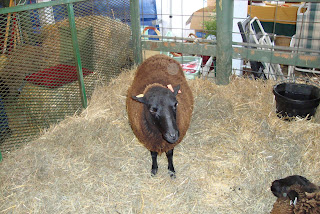 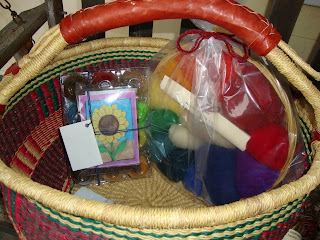 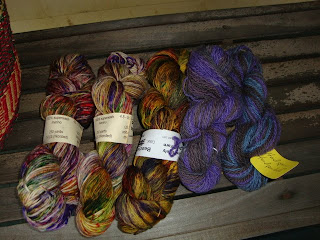 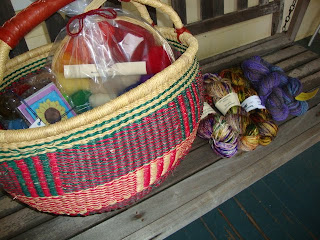 There were several vendors selling baskets, but I went back to the Fairtrade vendor and bought my basket from them. I had a hard time picking it out! I changed my mind three times. I have no idea where I'm going to put it, but they were just so pretty I decided to get one... I also wanted to buy some needlefelting, I've been wanting to try this since I went to the HHCC meeting and there was a demonstration. I bought a kit from "The Herd of Northern Vermont" to make a sunflower. I later bought another kit from "The Fiber Craft Studio." Can't wait to try this! I bought 3 skeins of yarn from Creatively Dyed. I then was walking around waiting for my ride to finish her purchases and I bought a couple of skeins from one of the farm stands of a handpainted yarn, sorry not sure, but think it might have been "Moonlight Llamas."...I spent quite a while admiring the animals. I love alpacas and llamas, so spent a long time in their barn. There were some interesting species of sheep. I loved the American Black Welsh and Crimson Shamrock.
Posted by Gracey is not my name.... at 8:57 AM No comments: 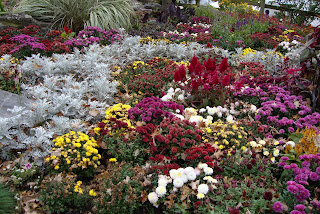 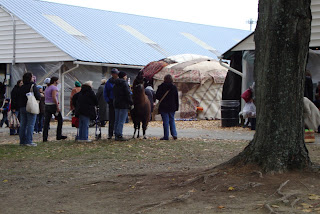 This was my second year at the NY Sheep and Wool Festival in Rhinebeck, NY. It was suppose to rain, but didn't, although it was cold. I wore my new hat and curly scarf. The scarf got lots of comments. Here are some pics of the day. A yurt that was put up by a vendor. They did wet felting. It was really cool! There was a nice display of fall flowers that was really colorful. A good crowd, we got there about 10:00 and it wasn't too bad, but by noon, it was very crowded! We stayed until about 5:00 and it was really emptying out by then. I did go to the Ravelery meetup, but really didn't know anyone, since I don't post often there. I did meet Anne from Norway, but did not get her Ravlery name. She took a nice picture of me in my new hat and scarf. I also shopped at Creative's booth, Creatively Dyed. I bought two skeins of Woodbrook in the colorway of "School" Cuz how could I pass that up? I really liked a skein that she made special for the festival, but didn't purchase it. Later I went back and it was still there, so I snapped it up. I will try to get pics later of my goodies, as it is early and not too light out.
Posted by Gracey is not my name.... at 8:39 AM 1 comment: 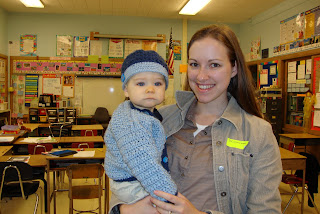 Here is my friend's daughter Ashley and her baby E. He is wearing the hat and sweater I made him. I had made a blanket and fish when he was first born....

I am stashing right now on Ravelry. I have 425 skeins stashed. I am overwhelmed with it, because I have many more to do....Next week is Rhinebeck and then Stitches East. I know I will buy more there, but hopefully I'll remember this feeling and not go overboard!
Posted by Gracey is not my name.... at 7:29 PM No comments: 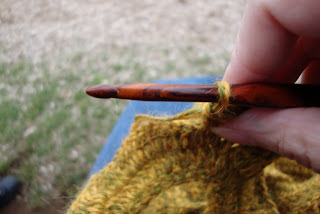 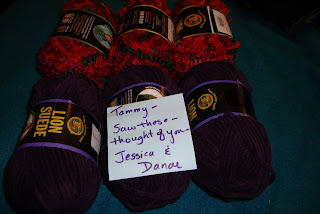 Although the picture is a little dark, this was a nice surprise. I went into school yesterday and underneath my mailbox was a bag of yarn waiting for me! My friend Danae and her daughter Jessica had bought me some yarn at The Christmas Tree Shops. What a nice surprise! Danae asked my today what I could make with it and I said a Fat Bottom Bag...I know some people have made them using the suede. The purple suede is such a deep rich color....

Now this other picture is of me working on my curly scarf at recess. It is done now. I am bringing a bag with me every day to recess now. Today I was not sitting and crocheting and I had two students come and ask me if they could see my projects....

I am going to be starting an afterschool program, a Crochet Club. I'm only going to run it from December until February and limit it to 10 students. Hopefully I'll have some!
Posted by Gracey is not my name.... at 9:53 PM 2 comments: 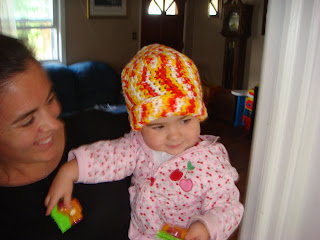 My friend gave me permission to post a pic of her daughter Natalie in the Candy Corn hat that I made her...She is pretty adorable...
Posted by Gracey is not my name.... at 5:03 PM No comments: 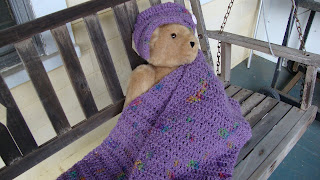 So today I finished the scarf I made to go with A's hat. I will be giving them to her on Sunday. I am also going to make her a necklace. I bought a pendant in Buffalo NY that says "Big Sister" on it. I hope she likes these things. It's hard to know whether I should just buy something for kids or make something....My Vermont Teddy Bear is modeling as I have no real models...
Posted by Gracey is not my name.... at 4:54 PM No comments: